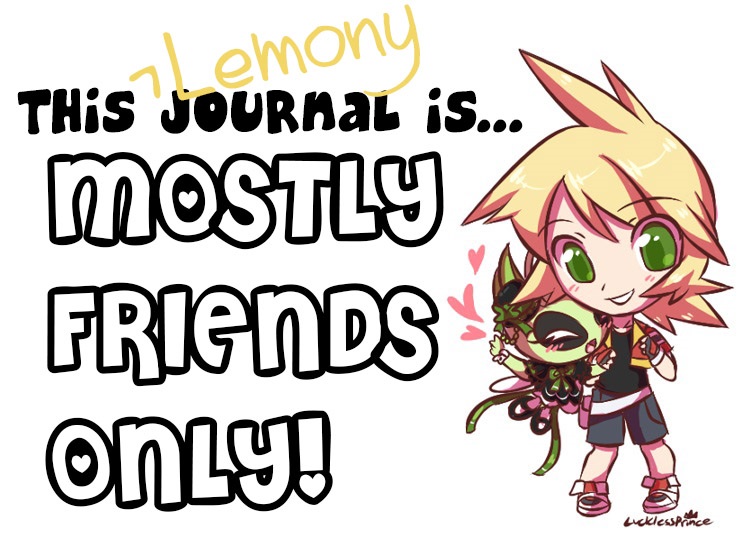 I need some serious advice from fellow collectors...

I just came back from Japan, and I am sorry I have not been on LJ at all! ;__; there was just too much stuff going on...
But now that I have time to think, and my head is clear... I've started to think while looking at my collections, "what IS all this stuff?"

If you don't know already, all of my walls are lined to the ceiling (LITERALLY) with plushies and manga. I don't have a problem with the manga, since I can use them for reference materials, more or less, but what about the plushies?

At this point in my life, I'm not sure how I feel about collecting pokemon anymore. DON'T GET ME WRONG! I will always love collecting, but right now... I feel like more of a hoarder. There are so many random things scattered around... I have plushies of pokemon I just "like" and don't even collect. They take up room, and I just have one thing piled on top of another! My whole room feels like a jungle, and now that I'm getting older, I feel like it is time to stop.

My interests are broadening, and now I've found myself seriously interested in dollfies (or BJDs). I bought my first one during my trip to Japan, and I am completely in love. They are not cheap, but they don't take up space like plushies do, and they are just as, if not way more, lovable (IMO).

I know many of you have faced this tough decision before, so I ask you.... when do you know when it is time to let go of some of your collections? Is it difficult? Do you lose a lot of money?

Things I know I will weed out:
Eevee & eeveelutions
pikachus (dittochus, couplechus, promochus)
All legendary pokedolls (so far have one of each? or more?)
Random legendary plushies
Snivys (Huge carnival snivy, sleepy, talky, etc)
giant magikarp... ANY ADVICE ON HOW TO GET RID OF THIS THING!?!? It takes up so much room.. I want to get rid of it so horribly...

THINGS I AM HESITANT TO SELL (keep in mind these will be pricey...)
Giant pokemon center Lugia
Purple Mirage mew
Mirage Eevee

Why am I thinking of selling these even though I REALLY DO NOT WANT TO...? Because coming back from Japan.. I have a huge credit card bill to pay. I am not even going to joke about how bad it is because it is BAD. I am also going back to school in the fall, and need to pay for tuition UPFRONT (I dont have a student loan and cannot get one). Also, I plan on going back to Japan next year to study and visit my host family.

So how is this going to work out? I dont know.
Any advice? I will probably write more about this later on....
If there is anything in my collection you are interested in, feel free to let me know. I am probably going to list everything on ebay, because I can probably get more from there, than on the comm.

I have been pretty non existent the last few weeks T__T I've been rushing sales, and I also had to finish a bunch of sewing stuff before I left. Also rushed a bunch of other things so I just haven't been online. My computer is dead because I forgot to buy a converter (it's three pronged) so I will need to buy one at akihabara, since according to my home stay mom, it will be the only place I can find one.

If you are interested in where I live... It is about a 15 min bike ride from hikarigaoka station. I brought this bigass bag with me which was stupid as fuck. My shoulder hurts like hell so I need to buy something else. I want something cheap, like a drawstring bag. I found a Pokemon one today At kiddyland, but it was too small :( I am hoping I can find something practical at the pokecen.

Holy crap I love UFO machines. They are sooooo fun to play. I found some Pokemon today ( giant dedenne and I love eevees) but I wasn't particularly interested in those so I went for a yuki miku. Let me just say this, I have no idea what the heck vocaloid is. I don't really like it, but the characters are cute, so that's why I chose miku. She is really growing on me! Anyways, if any of you are familiar with vocaloid, can you explain to me what it is? Is it a game or something?
Here is a pic of the machine after I won 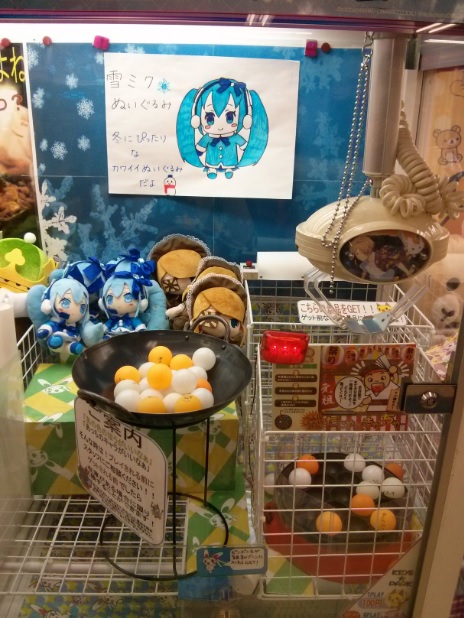 One try costs 100y and six tries costs 500y. I put in 1000 y and won her on the 8th try. You pick up ping pong balls with the grabber thing, and you drop it into the egg tray looking thing below. There is a single one that is silver, and you need to get a ball into it in order to win. I wouldn't say its a hard game... You just need to be persistent ( and have money....) it's a lot of fun!

and here is yuki miku 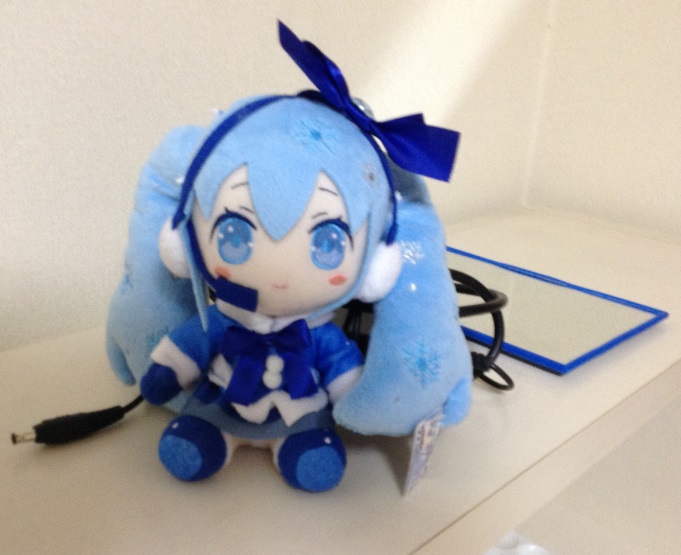 i told myself not to buy useless junk on this trip.... But I don't think I will be able to help myself OTL I'll prob spend all my money playing these games.

Ah, and I cannot slurp noodles if my life depended on it. I haven't a clue how to slurp ~elegantly~ and just get crap all over my face when I try.
Will prob update tmr with more pics. I am going to try to go around via subway or something but I will be busy since I have to study for a placement test that is on Tuesday.

I am the ONLY student in the manga coarse, so it is one on one with a manga instructor. holy crap that is awesome. Manga starts on Wednesday, so I will prob have lots to blab about then.

I am punching myself because they have swimmer biscuit bags here and I bought one via shopping service for much more =___= sob. I know I am going to see a bunch of other stuff I should've waited for... but oh well. Better off not thinking about it... 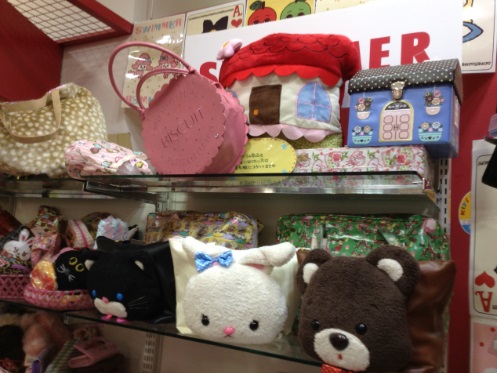 I could go on and on about all the cute and frilly things, but I'll spare you all... for now

I took these pictures a month or two ago and I am only finally posting them now.....
F-list, if you see anything you want, I'll pick it up for you. askin +$5 so I can buy lunch(es)!
star* at the end of the price means that it may be a bit more than I remember.

the store will be closing down at the end of the year so I figured I would help them get rid of their stock... do you think it would be worth applying for pick up permission for these? There really isnt a lot of stuff but maybe someone may be interested? What do you guys think?
( Collapse )

the head is the actual pouch. the body is just an add on.
I don't think I will be doing these pouch commissions anymore. I have two more coming up, and that will be it !

or sexiness
( Collapse )
Sakamoto desu ga?
Manga link
you know you want to 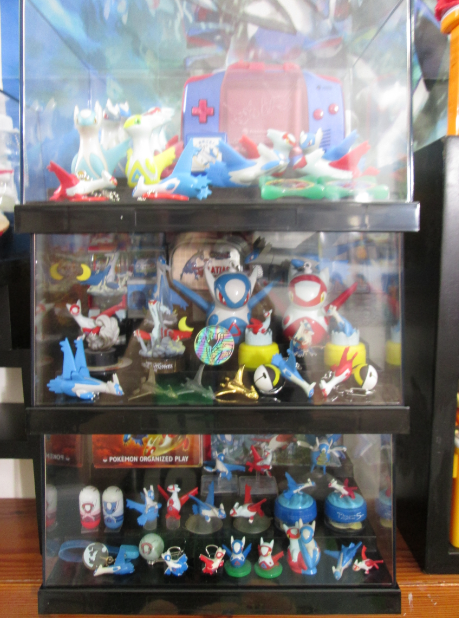 I feel so organized!
The pics didn't come out very clear, but I will take better ones later for my site (still WIP). I have three more cases to fill: one more for latis, one for celebi, and the last one for mew.

I'm not sure if I will be piling them all up like this or not. I will see how much space I have, because I have a fireplace in my room, and these are placed on the mantle.

Anyways, I went back to the toy store today and took a bunch of pictures! I asked the lady if she had anymore pokemon stuff in the back, and she said that she would check today. I'm going back tomorrow to check :)
Collapse